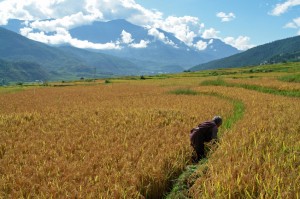 Although Bhutan’s early history is rich in mythology, much of it remains unknown. It may have been inhabited as early as 2000 BC, but little was recorded until the introduction of Tibetan Buddhism in the 9th century by monks fleeing the turmoil in Tibet. Bhutan is also one of the only countries that has been independent throughout its history, never conquered, occupied, or governed by an outside power. The people of Bhutan have drawn a rich culture and made it the essence of their timeless identity.

Sodha Travel is proud to be one of the few travel companies that specialize in Bhutan. Our private Bhutan tours, personal connections, and expertise create custom packages that intimately showcase the culture and landscape. Enjoy a traditional hot stone bath in Paro after your trek to Paro Tatksang (Tiger's Nest) or enjoy dinner at the hillside home of a local family. Here is a list of our Bhutan FAQ's:

Can you tell me more about the locals?

Bhutanese people can generally be categorized into three main ethnic groups - Tshanglas, Ngalops and Lhotshampas. Slavery was abolished by the Third King Jigme Dorji Wangchuck in the early 1950s through a royal edict and the Bhutanese society is free of caste or class system. Although a few organizations have been established to empower women, Bhutan has generally been gender sensitive. The Bhutanese enjoy archery (the national sport), dancing, singing, and social gatherings.

Yes, altitude sickness is common in Bhutan and can affect any traveler, regardless of age, strength, or fitness level. Symptoms include dehydration, fatigue, dizziness, shortness of breath, edema and insomnia. To alleviate the chances of altitude sickness, we recommend limiting alcohol, staying hydrated and planning for rest days in the higher elevations.

What is the currency of Bhutan?

What is the main religion of Bhutan?

For more information on Bhutan, view our Sample Bhutan Tours and About Bhutan pages. You can also request a Bhutan Destination Guide.