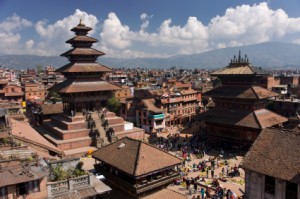 Kathmandu Valley: The Kathmandu Valley includes seven cultural and historical sites: Durbar Squares of Hanuman Dhoka (Kathmandu), Patan and Bhaktapur, the Buddhist stupas of Swayambhu and Bauddhanath and the Hindu temples of Pashupati and Changu Narayan.

Sagarmatha National Park: This National Park includes Mt. Everest, the highest peak in the world. Sagarmatha is a unique region with glaciers, deep valleys, and striking mountain ranges. The Sherpas, an ethnic group from Eastern Nepal, reside in the area and are often regarded as expert mountaineers.

Lumbini: The birthplace of Lord Buddha and a Buddhist pilgrimage site. It is believed that Buddha lived here until the age of 29. The holy site is surrounded by a monastic zone, allowing only monasteries to be built and no commercial property, including hotels and restaurants. The precise location of Buddha's birth is located in the Mayadevi Temple, and there are monasteries, a bathing pond and sacred Bodhi tree.

Sodha Travel's Nepal sample tours include these UNESCO sites, including Legends of Nepal, Mt. Everest Expedition, and Wonders of Hinduism and Buddhism. Our Destination Specialists can also create a custom tour package that incorporates your special interests and travel preferences. Contact our team to start planning your Nepal adventure!