Last night, we visited the Cochin Cultural Center and watched the magnificent Kathakali, the stately dance of Kerala. The dancers represent characters from India's ancient epics, including the Ramayana and Mahabharata, and tell a story accompanied by a percussionist. In the past, the dances would continue for over twelve hours, from sunset until sunrise. However, most modern performances last less than a few hours as a way to introduce the dance form to others. 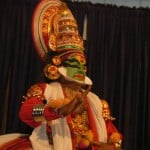 The first part of the show is a make-up demonstration, as it shows the metamorphosis of mortals into immortal deities and demons. Traditionally, the process would take over three hours to complete. The characters are said to represent the existence in three worlds: the worlds of the Gods, the worlds of the demons and the worlds of the humans. Due to its presentation, Kathakali does not have many followers but instead a circle of admirers. It is difficult to find this particular dance form outside of Kerala.

For those travelers visiting Kerala, I highly recommend an evening of Kathakali. Performances are offered at various venues and we will gladly arrange an evening to observe and be mesmerized by this 400-year old tradition.