The Life of Sherpas in Nepal - Nepal hiking specialist

Renowned for their climbing skills, exemplary strength, and endurance at high altitudes, Sherpas play the most invaluable role when it comes to mountaineering expeditions. Sherpas are guardian angels of the Himalayas and, without them, every expedition is incomplete!

The Sherpa, also called Sharwa, are a group of mountain-dwelling people in Nepal, Sikkim (India), and Tibet (China). They also live in parts of Australia, North America, and Europe. The name Sherpa means “people living in the East.” They began to migrate in the 15th century to make a living by working as traders (salt, wool, and rice), herders (yaks and cows), and farmers (potatoes, barley, and buckwheat). Sherpas belong to Tibetan culture and speak a language called Sherpa which is closely related to the Tibetan language. However, the greatest number of Sherpas live in Nepal and speak Nepali in addition to their mother tounge.

The Sherpas of Nepal live in Solu-Khumbu district, in the fresh environs of Himalayas. This area consists of two regions which are connected by the Sun Kosi River and the Khumbu region at an elevation of 12,000 to 14,000 feet. The Khumbu region stretches from the Chinese border in the East to the banks of the Bhote Kosi River in the West.

Sherpas lead a utilitarian life, with many surviving through trade and subsistence farming. They grow crops like wheat and potatoes and some also raise yak. Sherpas often keep moving like nomads and live in multiple small stone huts in highlands and lowlands depending on the season.

The term Sherpa refers to a variety of ethnic groups that have exhibited excellent mountaineering and trekking skills. The Sherpa’s job is to set up the camp, manage the porters, and guide the trekkers to safety. The word “Sherpa” has become synonymous with those working as mountain guides. The Sherpa guides are not just the strong force behind the expedition - carrying extra gear, food, oxygen, and water bottles - but are also considered expert navigators. They can endure freezing temperatures down to -50°C and can help the climbers negotiate icefalls, avalanches, and extreme altitudes. Often thought of as self-sacrificing, Sherpas are considered as the best friends of foreign mountaineers.

Scientific tests and an American study conducted in 1976 suggest that Sherpas are genetically adapted to high altitudes. Adaptations include unique hemoglobin-binding enzymes, doubled nitric oxide production, hearts that can utilize glucose, and lungs with increased efficiency in low oxygen conditions. 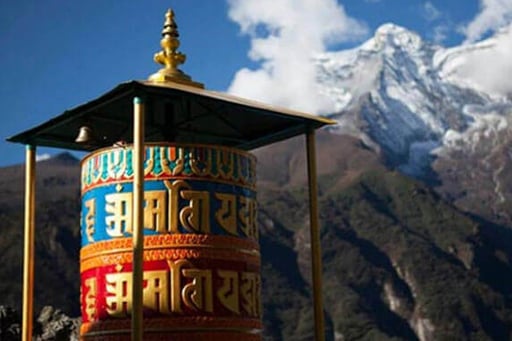 For Sherpas, the mountain peaks are revered as God’s home which should be respected and not conquered. Even Sherpas who do not pursue climbing believe that accidents occur when the Gods are not duly respected. They believe that climbing expeditions must precede with a prayer ceremony or Puja to make an offering to the Gods.

Sherpas respect the mountains and therefore have attempted to prevent foreign climbers from engaging in profaning or polluting activities. They do not encourage acts like the killing of animals and the burning of garbage, which they believe will lead to disrespecting the Gods. 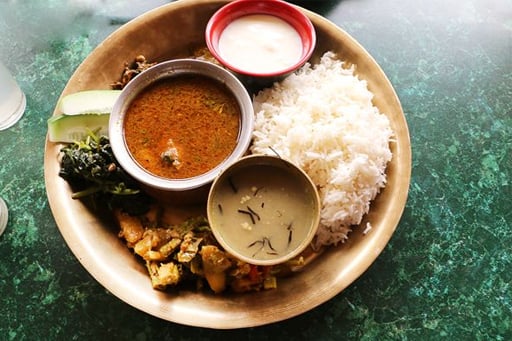 Dal Bhaat, the staple dish of Nepal, is what fuels many Sherpas for long and strenuous expeditions. It is a meal consisting of a heap of white rice along with curried vegetable and lentil juice. A carb-based diet is very important to keep the Sherpas strong and provide enough energy at high altitudes..

The genetically adapted guardian angels of Mount Everest are considered invincible. However, many Sherpas have lost their lives or are being left to die on mountains while performing their services dutifully. There are grim stories of many Sherpas who were left in the mountains to fend for themselves. The mountains, although considered as the lifeblood for the Sherpas, can prove deadly for the ethnic group, indigenous to the cold peaks of the Himalayas.

Tenzing Norgay Sherpa’s joint summit with Sir Edmund Hillary in 1953 is considered as the proudest moment for the Sherpa community.

The Sherpa community is truly called the  “army of mountains” which plays an integral part in Nepal’s tourism industry.