During my recent trip to Thailand, I had the privilege to meet with John Gray, the owner of John Gray's Sea Canoe excursion. John has been highlighting natural history by sea kayak since 1983, and sea caving is just one educational venue in his line of conservation initiatives. The company motto says it all: We Don't Do Anything Normal. And John should be proud of that, as the excursion has been rated one of the "Top 25 Experiences in the World" by National Geographic. 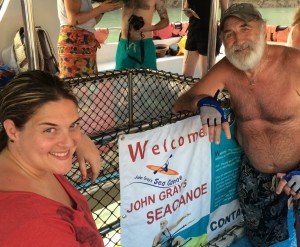 John himself is a pioneer in conservation, starting at an early age. In Hawaii, his efforts were influential in turning Malaekahana, Kahana and Kaiaka Point into State Parks instead of tourism developments. His stories reminded me of a Jimmy Buffet novel, only with more environmentalism and less music awards. (John did, however, win an EMMY Award.) His past, though eclectic, is strongly rooted in protecting Mother Earth and her inhabitants. As John writes, "Even at 7 I realized Mother Earth was sick. My role was not the pursuit of money, but a far richer goal – stimulating your awareness of the marvels of Nature – before they are gone."

So what makes the sea kayaking in Phang Nga Bay so special? Is it the natural beauty of the hidden caves and lagoons that John found in 1989? Is it the evening Loi Krathong ceremony, complete with bioluminescent plankton that sparkles in the water? Perhaps it is the on-board meals, prepared with free range chicken, aeroponic vegetables, and freshly caught seafood? As my associates and I sat on the roof deck, we just couldn't find the words to capture the experience. The moon was rising on a clear night, and we sat silent under shooting stars as the boat sailed back to the pier.

Here is a short clip from inside Bat Cave and Bat Lagoon:

Sodha Travel is proud to offer John Gray's Sea Canoe excursion to our clients visiting Phuket. Here are a couple additional photos from the trip:

Photo from Bat Lagoon in Phang Nga Bay with my guide, Ole'

Making the Krathong for the Loi Krathong Ceremony

Sodha Travel would like to thank John and his team for an educational and enriching experience. It was truly filled with wonder and joy.