The Health Benefits of Indian Spices

The methodology of Indian cooking has influenced the cuisine of many cultures worldwide. Experiencing the local and regional spices is often a request from our clients when traveling to India, and what makes our Taste of India package so popular. The following guest post is written by Chandrika Nimmagadda, a Sodha Traveler who owned Curry Leaf restaurant in Portland, Oregon for eight years. 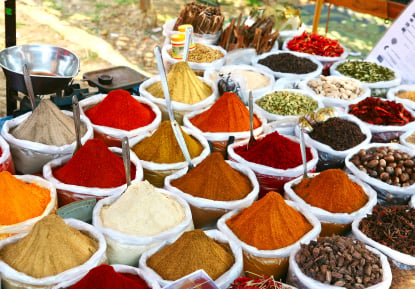 A collection of Indian spices

Indian cooking still uses techniques from ancient dynasties which have been combined with cooking processes from all over the world to create a liberal modern tradition. The ancient art of cooking included spices, which still factor heavily in modern Indian cuisine. The spices come in different colors - red, yellow, green, brown, black - and brighten up your food palette! They add taste and variety to the human existence. Now, even scientists are dipping into the kitchen cupboard and discovering the significant health benefits of some of the most common Indian spices that contribute towards a tastier and a healthier life.

Cinnamon (Dalchini)
Seldom do you realize the presence of cinnamon in your food. This spice does its job, covertly and effectively, and is much more beneficial than the taste it offers. Studies have shown that just a 1/2 teaspoon of cinnamon per day can lower LDL cholesterol. Several other studies suggest that cinnamon may have a regulatory effect on blood sugar, making it beneficial for people with Type 2 Diabetes. Cinnamon reduced the proliferation
of leukemia and lymphoma cancer cells. When added to food, it inhibits bacterial growth and food spoilage, making it a natural food preservative.

Saffron (Keshar)
Known as the golden spice and spice of richness, saffron is exotic and often used during auspicious occasions. Its presence gives color to a dish and is used for the treatment of kidney, bladder and liver disorders. Saffron is known to lower blood cholesterol and triglycerides among heart patients and improves circulation to the organs. It is also used in many cosmetic preparations for enhancing and lightening skin tone. 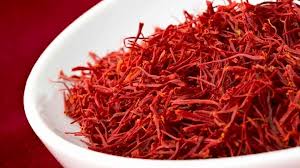 Cloves (Laung)
Cloves are often found in biryanis and pulaos. More often than not, you find it a hindrance while chewing, and keep it in one corner of the plate. Have you ever wondered why this spice, which actually is not even consumed, is added in the first place? Cloves are the dried flower buds of the clove tree and have been known to possess medicinal properties for centuries. Cloves are stimulating and have antibacterial, antiviral, anti fungal and antiseptic properties. It is also a natural anesthetic and used for dental procedures to remedy toothaches. Clove oil can be used to treat acne, as the oil contains a compound that helps with blood circulation and can stimulate the skin. Cloves are well known for relieving flatulence and can actually help promote good digestion as well as metabolism. It can additionally relieve vomiting and diarrhea.

Black Pepper (Kali Mirch)
This is the spice that you see daily on your dining table. Besides consuming black pepper for taste, it improves your digestion by stimulating the taste buds to notify the stomach to increase its secretion of hydrochloric acid. Black pepper provides a natural solution to intestinal gas. It is an antioxidant, curtails oxidative stress, and reduces the damage caused by a diet full of saturated fats. Black pepper also prevents bacterial growth in the intestinal tract.

Cardamom (Elaichi)
Cardamom helps in countering stomach acidity. It also acts as an aphrodisiac when the powder is sprinkled on coffee. It generates appetite, aids in nausea and relieves halitosis. The fragrant seeds of cardamom contain a certain oil that helps in stimulating digestion and relieving flatulence.

Ginger (Adarak)
Ginger has long been regarded as an essential remedy in the East, but recently Western medicine has also embraced the health benefits of ginger. Ginger is used extensively in Indian cooking - almost all dishes include it in some form. It also helps with digestion, nausea, colds, cramps, and muscle aches.

Additional Spice Tips:
* Spices should be stored in airtight containers in a cool, dark place.
* It is best to store spices in their whole form. They rapidly lose their freshness and flavor once ground.
* Spices should be prudently used as part of a healthy diet. Remember, spices are not medicines and are not intended to be consumed raw.