It's official! The Indian Rupee will soon have a unique symbol - a blend of the Roman R and Devanagri Ra. India joins the United States, Japan, and Britain as having a distinct identity. The symbol was designed by D Udaya Kumar, an IIT (India Institute of Technology) Bombay Post Graduate. Kumar's entry was chosen from over 3,000 entries. Ambika Sona, the Information and Broadcasting Minister, stated, "It's a big statement on the Indian currency... The symbol would lend a distinctive character and identity to the currency and further highlight the strength and global face of the Indian economy." 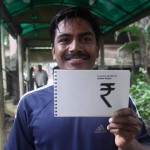 The symbol will not be printed on currency but will be included in the Unicode Standard, an international standard that allows global data to be exchanged without discord. You can read the full article in The Times of India. Congrats, India, for joining the "unique currency club."