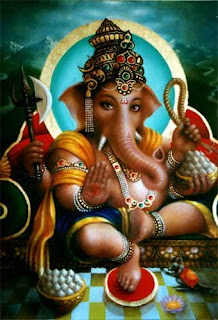 We often receive questions from our clients about Ganesha: Just who is this elephant-headed deity and what is its significance?

Ganesha, also known as Ganesh and Ganapati, is one of the most recognized and widely worshipped deities in Hinduism. Although the image is commonly found throughout India, Nepal and other areas of South Asia, many people worldwide have a particular fondness for Ganesha, regardless of religious affiliation.

Most recognized by his elephant head, Ganesha is revered as the Remover of Obstacles and God of Luck and Good Fortune. Therefore, he is honored at the beginning of rituals and ceremonies and worshipped on many religious and secular occasions. Ancient texts state that Ganesha was born with a human head to Lord Shiva and Goddess Parvati. When Ganesha came between his father and mother during a dispute, Shiva beheaded his son. Shiva then replaced his head with that if an elephant. There are numerous variations to this story, though the above is commonly narrated.

In India, images of Ganesha are everywhere. One of our clients recently returned with over 200 pictures of the deity! She was captivated by its placement in the homes and hillsides throughout the country. Please send your own travel images to travel@sodhatravel.com