A Tshechu is a religious event, celebrated on the tenth day of a month of the lunar calendar which corresponds to the birthday of Guru Rimpoche. It is believed that every Bhutanese must attend the Tshechus and witness the mask dances at least once to seek the blessings of their divine gods. It is a large social gathering that inculcates a sense of bonding among communities, especially for those living remotely in the Himalayas.

Here are 10 important and colorful festivals in Bhutan:

The Thimphu Tshechu Festival, also called the National Festival of Bhutan, is the largest and most popular celebration in the country. The actual Tshechu is preceded by days and nights of prayers to invoke the divine gods. The festival is held at Tendrel Thang (a festival ground) and the mask dances (cham or folk dances) are performed to bless onlookers and teach them the Buddhist dharma. It is believed that one can attain good fortune by attending these festivals. 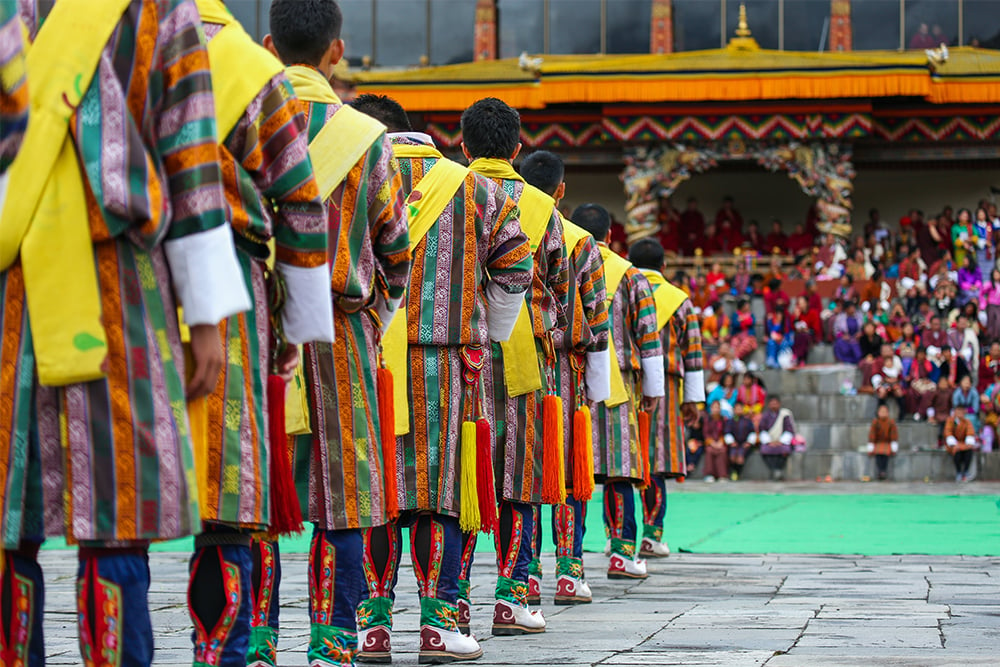 Jambay Lhakhang Drup Festival is held at Jambay Lhakhang Temple in Bumthang. It is one of the 108 temples that was built in a day by the 7th century Tibetan King Songsten Gampo. The festival is marked by various mask dances, which are called chams in the local language. Mewang, the fire ceremony, attracts thousands of tourists. During the ceremony, the locals are seen dancing under a flaming structure made of dry grass. The Dance of Treasure, or Tercham, is the main highlight of the event where masked dancers perform naked to bless infertile women so they may bear children. 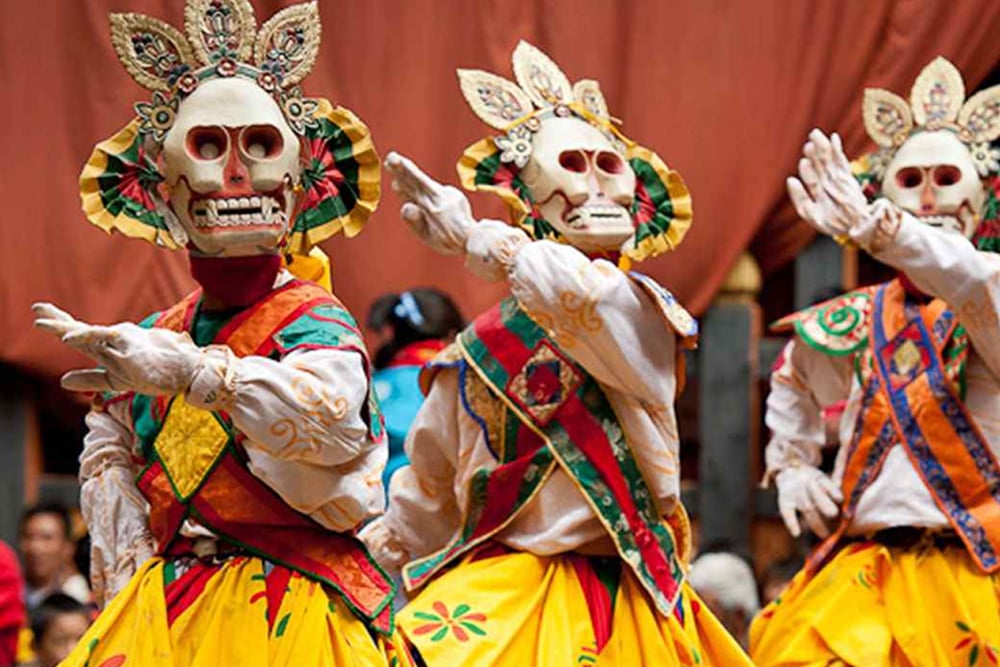 The region of Wangdue Phodrang is known for ornamental speeches and songs called Lozeys. The annual festival was introduced after the completion of a fortress in 1639. ‘The Dance of Ox’ is the major attraction where people dance to ensure a peaceful afterlife. The festival concludes after the unfurling of gigantic paintings known as Guru Tshengye Thongdrol.

The Punakha Drubchen hosts a dramatic recreation of the scene from the 17th century battle with the Tibetan army. The local military men dress in traditional battle gear and reenact the entire scene. The festival celebrates the victory and pays tribute to the common people of Thimphu who came forward to drive the Tibetan army out of their country. This is lauded as the victory that ushered in a period of new-found internal peace and stability. In 2005, the Punakha Tshechu was introduced in response to the request made by the Punakha District Administration to host a ceremony to preserve Buddhist teachings. 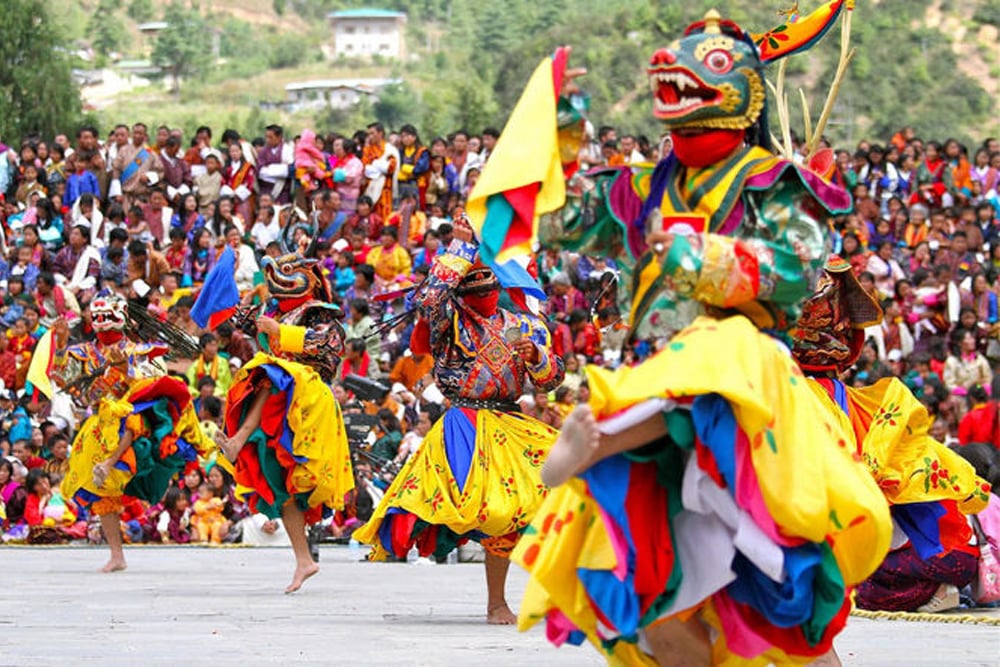 The Paro Tshechu is held in Paro Dzongkhag district and considered as one of the biggest religious festivals. This celebration continues for five days, usually during springtime on the 2nd Bhutanese Lunar month. The festival depicts the beautiful culture, tradition, and age-old customs followed in Bhutan. Monks and laymen dress up in vibrant costumes and dance together. On the last day, a gigantic thangka or embroidery painting is shown to all. It is believed that by witnessing this Throngdrel, it can cleanse the sins of the viewers. 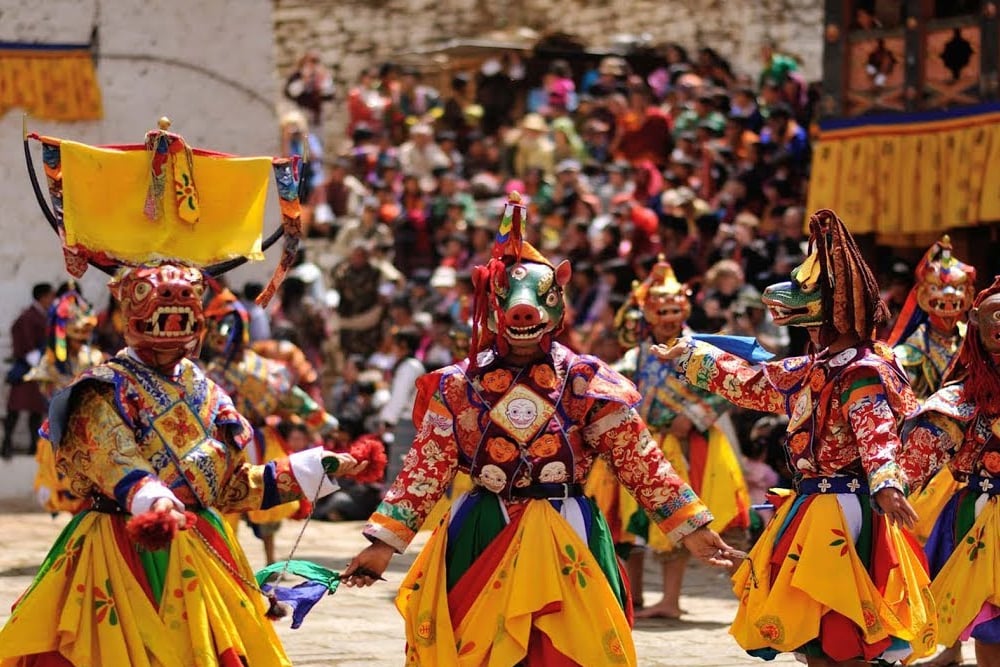 The Matsutake Festival is celebrated by the locals of Ura Valley during the mushroom season. This festival offers an insider view to the local lifestyle of Bhutanese villagers. Visitors in attendance can enjoy the mushroom picking excursion and bask in the scenic Ura Valley’s forests and hilly areas. 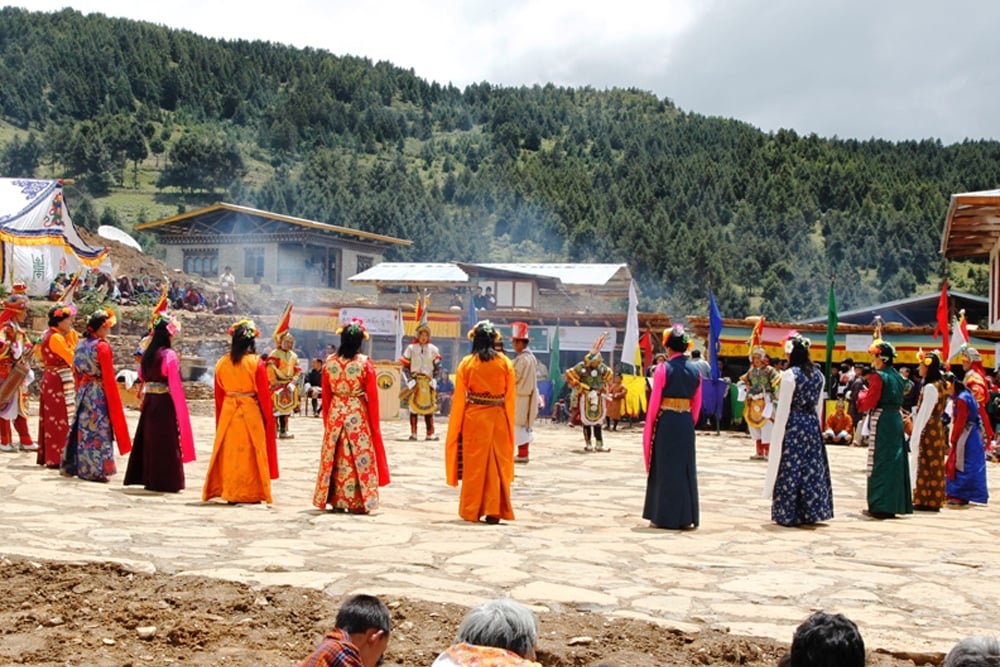 The Jomolhari is celebrated for two days. Its magnificent theme and humble locals represent the cheer of the festival which is celebrated at the foothills of Mt. Jomolhari. The main attraction is the ‘Snow Leopard Show’ which aims at making people aware of the declining number of snow leopards in the region. The locals dress in their traditional attire and dance to folk songs. 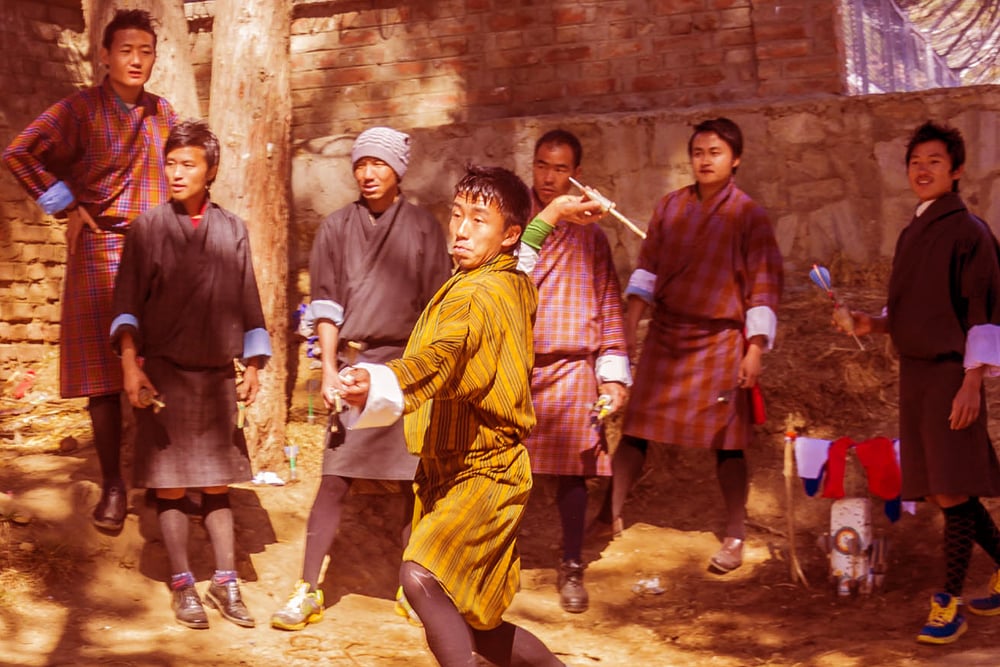 This three-day celebration is overflowing with traditional folk dances and vibrant attire. Don’t miss the main attraction, the Mask Dance, when locals beseech the gods for their blessings and pray to help them get rid of their misfortunes. The festival culminates with a rare display of a giant silk applique thangkha (painting) depicting Guru Padmasambava and other important deities. 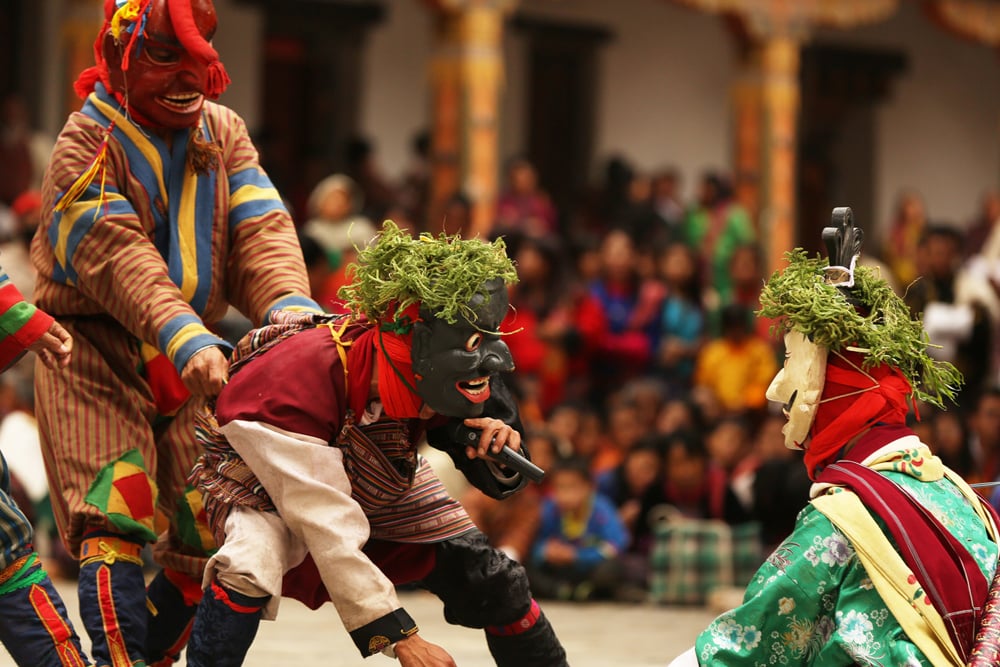 The Nomad Festival is an annual celebration that takes place in Bumthang. Nomadic people from all parts of Bhutan come together to celebrate. This festival introduces the culture, traditions, and lifestyle of these nomadic people. Prominent events include the ceremonial royal procession of Chipdrel and rows of stalls featuring various indigenous arts, crafts, and culinary delicacies. 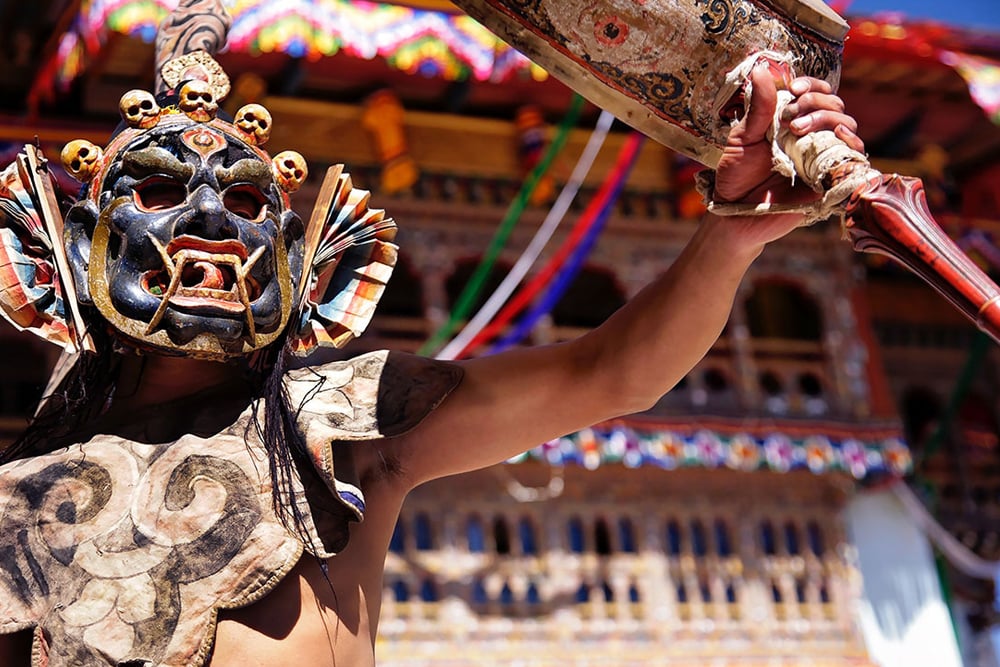 The Takin Festival is held in Jigmi Dorji National Park of Gaza Dzongkhag. The Takin is a rare and endangered species around the world but thrives in the Land of the Thunder Dragon. The festival allows visitors a rare opportunity to witness Bhutan’s national animal in their native summer grazing grounds. It also helps nomadic tribes earn money to sustain their livelihoods for the remaining months. They pitch woven tents made from yak hair, cook traditional dishes, and sell local items that include handmade crafts, yak butter, and cheese. 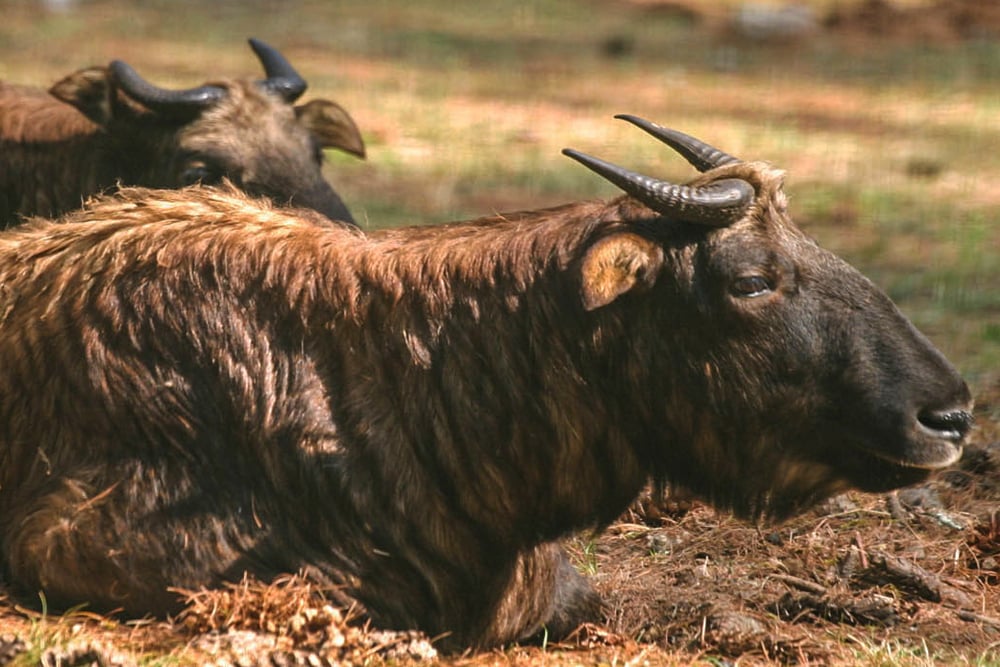