Welcome to UAE! The United Arab Emirates has become one of the most luxurious and extravagant destinations in the world. Most travelers only focus their touring in Dubai and Abu Dhabi, two of the seven emirates that encompass the country. Although the Burj Khalifa, Palm Islands, and Sheikh Zayed Mosque are spectacular sites, consider a tour that goes beyond the centralized districts.

Sharjah is an exciting, lively city with colorful souks filled with artifacts in every corner.  The combination of restored houses in traditional style with walls of sea coral; the bright colors of the material souks; the local fruit and vegetable market and the fascinating fish souk; together it evokes a magical feeling. This magic is illustrated in the museum, housed in the newly renovated Fort of Ajman. In the Al Markazi Souk, the skills of the gold jewelers are on display. The numerous monuments in the city reflect the craftsmanship of the people, especially in the renovated Conservation Heritage Area.

A roller coaster ride on the sand dunes! The desert safari gives you the opportunity to see the golden sand dunes of Arabia by 4x4 vehicle. While on the journey, stop on the highest dune to view the beautiful sunset. Continue to a Bedouin Campsite, located in the heart of the desert, where henna design, local dresses, soft drinks, water, tea, or coffee are available for your enjoyment. Hop on a camel ride or try the Hubbly Bubbly (water pipe) in different flavors. Adding to the atmosphere of the night, an enchanting belly dancer performs a traditional dance to a rhythm of Arabic music. A delicious BBQ buffet dinner is included. 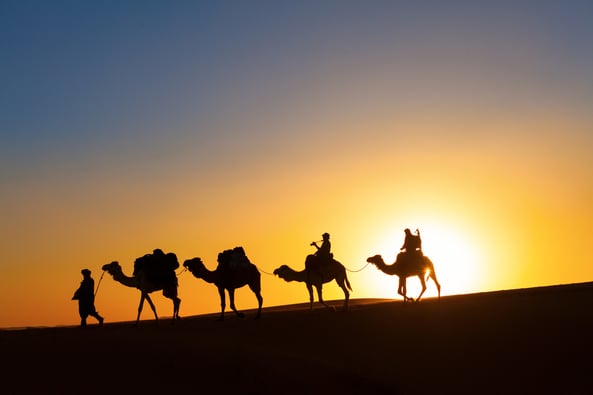 The Secrets of Arabia

When visiting the Gulf, it is worth taking time to explore the culture, heritage, art, and local cuisine. This tour begins with a visit to a heritage house, built in 1890 and owned by Sheikh Ahmed bin Dalmouk, the most famous pearl merchant in Dubai at that time. It is one of the best examples of a traditional Emirati family home. The Al Ahmadia school was the first school in the Emirates and played a very important role in the history of education.  Many members of the ruling family have studied there.  On the other side of the creek, explore the charming Bastakya with its narrow lanes and houses with tall chimney-like structures called wind towers. You will also learn about architecture, culture, and arts while visiting this part of Dubai. On the courtyard outside the Mosque, you will be introduced to the basics of Islam and your guide will perform the process of abolition traditional washing ritual that Muslims do before the prayer.  Following the tour, enjoy a magical Arabic dinner experience at the 'Bastakiya Nights' restaurant. You will be able to enjoy local culinary delights in one of the oldest houses of Bastakiya.

Named to commemorate Dubai's historic pearling heritage, this 30-minute tour starts as you gently exit the harbor where you marvel at Dubai's breathtaking collection of sights.  After passing the outstanding Dubai Marina you are treated to a birds eye view of the world famous Palm Jumeirah, Burj Al Arab hotel, Downtown Dubai, Burj Dubai, and The World islands. Then, head back along the coastline for a second pass and a gentle splash back down to earth.

This half-day tour takes you to the 200-year-old village of Hatta. After an early departure by 4X4 vehicles, proceed along the road until you reach the mountains, followed by an adventurous drive through the rocky landscape. You will explore the Wadis and dry river beds, which usually get flooded in winter time with rain water. Next, visit the Hatta Heritage Village and view the oldest fort built in the 16th century, as well as the house of the old Sheikh of Hatta. Your last stop is the Hatta Fort Hotel for lunch.