The India Explorer: 21 Days in North and South India

Sodha Travel is excited to announce our newest tour, The India Explorer! Experience the highlights of India in a 21-day itinerary that s provides a comprehensive introduction to the diverse landscape and cultural wonders of North and South India. View the magnificent temples in Tamil Nadu, visit a tea plantation in Kerala, experience the majestic forts and palaces of Rajasthan, marvel at the Taj Mahal at sunset, and taste the distinct spices and regional cuisine.

Start your tour in Delhi, India's capital and a bustling metropolis that incorporates the ancient with the modern. After touring New and Old Delhi, travel to Agra and the home of the majestic Taj Mahal. You will also enjoy lunch with a local family and explore the Agra Fort, a magnificent citadel with marble palaces, ornate alcoves and terrace pavilions.

Continue to Jaipur, the "Pink City" of Rajasthan, and experience an elephant ride to Amber Fort. After a couple days in this ancient city, drive to Rajsamand and stay at the historic Deogarh Mahal, a restored Mewar Palace that is still partially occupied by the Royal Family. Enjoy a jeep ride in the countryside and traditional Rajasthani dancing in the palace courtyard.

After an enchanting evening in Rajsamand, drive two hours to Udaipur, the City of Lakes. Visit the City Palace and Museum, a blend of Mughal and Rajput influences and the largest palace complex in India. Also see the 17th century Jagdish temple, drive around the Fatehsagar Lake, and visit the Sahelion ki Bari, an ornamental pleasure garden with fountains and marble kiosks. Later, enjoy a boat ride on Lake Pichola.

Continue by flight to Mumbai, considered the commercial and entertainment capital of India. Visit the Elephanta Cave Island and view the magnificent ancient sculptures. Later, visit the notable attractions of Mumbai: Dhobi Ghat, Gateway of India, Crawford Market, Marine Drive and the old mansions in the Colaba area. An optional private tour of the Bollywood film studies can also be arranged. 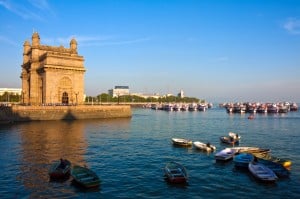 Then, travel to Cochin, Kerala by flight. Cochin (Kochi) has a diverse influence of Dutch, Arab, Indian, Portuguese and Chinese traditions. Visit the Dutch Palace, built in 1555; the Jewish Synagogue, housing scrolls of the Old Testament and copper plates inscribed in Hebrew script; St. Francis Church, where Vasco de Gama was buried in 1524; the Chinese fishing nets at the entrance of Cochin Harbor; and Willingdon Island, a man made island from materials dredged while deepening Cochin port. Also, you will enjoy a private Keralan cooking demonstration in the home of a local family and a traditional Kathakali dance performance!

After a leisurely drive to Kumarakom, board your overnight houseboat. Spend the day cruising the beautiful and enchanting Keralan backwaters. A backwater is comprised of a unique web of rivers, lakes, bays, lagoons and canals extending into the villages and towns. The kettuvallam or ‘boat with knots’ is held together with coir knots only - not a single nail is used during the construction. Meals are prepared on board by your private chef while you observe the untouched Keralan life.

Houseboat in the backwater canals of Kerala, India

After an overnight in Munnar, a hillside retreat scattered with tea plantations, drive to Madurai - one of South India's most renowned temple towns. Visit the Meenakshi Temple, dedicated to the consort of Lord Shiva with its towering Gopurams rising high above the surrounding country side. Also tour the Tirumala Nayak Palace, a gracious building in the Indo Sarracenia style.

Continue to Trichy and Tanjore to tour the exquisite temples, including the 11th century Brihadeswara Temple. Then, drive to Pondicherry. Having been the capital of the French Indian colonies since the 17th century, Pondicherry has a rich French cultural heritage. The legacy is visible in the well-planned town, neatly laid roads, wide and vibrant beaches, beautiful promenades, and architecturally imposing churches and buildings. 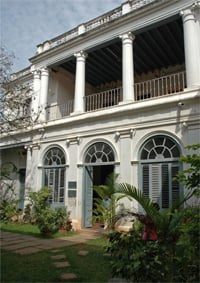 The final day of the Indian Explorer is spent in Mahabalipuram, once the capital of the Pallava Kings. Tour the Shore Temple, one of the oldest temples in South India that houses the shrines of both Shiva and Vishu; Arjuna's Penance, the largest relief sculpture in the world; and the Mandapams, the finely carved cave temples. The following day, transfer to the Chennai airport for your departure. If you prefer, spend a couple extra days touring Chennai! The city is the capital of Tamil Nadu, the exotic state famous for its temple architecture. It is the fourth largest city in India and the base of South India's classical music and dance performances.

Sodha Travel's India Explorer tour is a wonderful way to enjoy the highlights of North and South India in only three weeks!