Heritage Discovery provides an extended introduction to India's Northern traditions. It combines our popular Golden Experience package with additional stops in Varanasi and Khajuraho. Visit the Golden Triangle: Delhi, the vibrant capital; Agra, the home of the majestic Taj Mahal; and Jaipur, the Pink City of Rajasthan. Together, they create the geographical pattern of the three most visited cities in India. Also, visit Varanasi, a sacred city on the holy Ganges River, and Khajuraho, an ancient dynasty housing Tantric sculptures.

A sunset visit to the majestic Taj Mahal in Agra

An elephant ride to Amber Fort in Jaipur

Ancient sculptures of the Chandela Dynasty in Khajuraho

Sunrise boat excursion on the Ganges River in Varanasi

Visit to Sarnath, where Buddha preached his first sermon

Not quite ready to pack your bags? Download our free India Destination Guide.

Namaste. Welcome to India! Arrive at Delhi International airport. You will be met by our representative and transferred to your hotel.

Delhi is a bustling metropolis that incorporates the ancient with the modern. Amidst the skyscrapers, the monuments stand as a silent reminder to India's legacy. Driving from the airport, you will be impressed with Delhi's spacious, tree-lined streets, and garden parks. Overnight at the hotel.

After breakfast, enjoy a rickshaw ride in Chandni Chowk. Witness the architectural marvels, the multicolored facades, beautifully decorated shops, ethnically dressed locals and the fragrances emanating from the potpourri of eateries that line the historical alleys.

Mughal Emperor Shah Jahan (1592-1666) built the walled city of Delhi on the banks of holy River Yamuna.  It had a magnificent palace known as Red Fort, impressive mansions, enchanting bazaars, elegant shrines, royal gardens and fountains at every corner to romance ones' senses.  The Emperor’s beloved daughter Jahanara designed a major street called Chandni Chowk in front of Red Fort, with a canal running down the center and pools at major intersections reflecting the moonlight.  During the British regime, the street underwent major changes and since then the area has witnessed some of the most important events in Indian history. Today these splendid ruins and tales of valor are a testimony of the evolution of the times.  Chandni Chowk truly reflects the national unity, secularism and diversity of India. The tour covers 20 main sites including palaces, mansions, elegant shrines and colorful bazaars.  End at a Haveli (mansion) built in 1860, which has a photo gallery depicting the lifestyle of Mughals and a small lounge to relax and relish some famous snacks. Afternoon at leisure and overnight in Delhi.

After breakfast, proceed on a half-day tour of New Delhi. Drive past India Gate, the President's Palace, and visit the Qutub Minar. Originally an ancient Islamic monument, the Qutub Minar is the tallest tower in India. Built of red sandstone and marble, the minar is not without controversy. Some believe it was built as a tower of victory to signify Muslim rule in the country, while skeptics claim it was erected to call the devoted to prayer. The complex also houses the first mosque to be built in India and an iron pillar that mysteriously has a high resistance to corrosion, even after being exposed to the natural elements for centuries. In the afternoon, drive to Jaipur (5.5 hours).

Jaipur, the vibrant capital of Rajasthan, owes its name, foundation and planning to the great astronomer and warrior Maharaja Jai Singh II. The city is fondly called the "Pink City" due to the pink colored buildings and avenues. Overnight in Jaipur.

After breakfast, proceed on a full day tour of Jaipur. Start with a visit to Amber Fort. The final descent to this ancient city is made by elephant back—a truly memorable experience! In the fort, you will see magnificent palaces and halls covered with mirrored mosaics. After lunch, explore Jaipur city. Visit City Palace, a blend of Rajasthani and Mughal architecture that is still occupied by the Royal family. Also visit the Palace of the Winds and Jantar Mantar, the solar observatory. Overnight in Jaipur.

After breakfast, drive to Agra (5 hours). Upon arrival in Agra, transfer to your hotel. In the early evening, enjoy a Kachpura Heritage Walk. A narrow bridle path through agriculture fields near Mehtab Bagh takes you into the ancient village of Kachpura and Humayun’s Mosque. The walk starts with explaining the paintings (sanji art) on the walls drawn by community girls under a youth program. The traditional lifestyle of villagers is showcased - some elders smoking hookah, others making shoes. Humayun’s Mosque is another monument situated inside the village. Your walk ends in Mehtab Bagh from where you will have the opportunity to view the Taj Mahal at sunset. Overnight in Agra.

After breakfast embark on a tour of Agra including the Agra Fort, a magnificent citadel with marble palaces, ornate alcoves, and terrace pavilions. In the evening, enjoy a sunset visit to the Taj Mahal. Built in the 17th century by the Mughal Emperor Shah Jehan for his beloved wife Mumtaz Mahal, the Taj took over 22 years and 20,000 men to build. The monument is truly a wonder of the world. Overnight in Agra.

Following breakfast, take a tour of Khajuraho's various temples and explore the magnificent sculptures of this Chandela dynasty. Overnight in Khajuraho.

After breakfast, transfer to the airport for your flight to Varanasi. Upon arrival, transfer to the hotel. Afternoon at leisure to explore the winding streets and spiritual energy of the city.

Varanasi, also known as Benares, is one of the oldest inhabited cities in the world. According to myth, the city was founded by the Hindi deity Shiva, making it one of the most important pilgrimage destinations in the country. Situated on the banks of the Ganges River, Varanasi is one of the seven sacred cities of Hindus. Overnight in Varanasi.

After breakfast, drive to Sarnath where Buddha preached his first sermon. Later, explore Varanasi with its myriad temples and museums.

In the evening, explore the rituals of death and rebirth. Meander through the narrow roads and lanes, visiting sacred ponds said to house healing waters and visit the home of Kali, the powerful Mother Goddess who destroys the ego and liberates humans from the cycle of death and rebirth. Step into the abode of Aghors, renunciants who practice ancient Tantric rituals at the burning ghat, Manikarnika. The experience culminates with a visit to the temple of Sankata Devi, the Hindu Goddess who destroys sorrow. Overnight in Varanasi.

Early morning boat ride along the Ganges River to view the famous bathing ghats. Later transfer to the airport for your flight to Delhi. Upon arrival, you will be transferred to your hotel. Overnight in Delhi.

The day is at leisure for last minute shopping or optional sightseeing. In the evening, transfer to the airport for your onward flight. Bon Voyage! 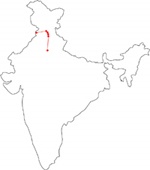