Take a spectacular adventure through India's national parks: jungle cats in Ranthambore, Bengal Tigers in Bandhavgarh, and leopard in Kanha. Kanha National Park is also the popular landscape depicted in Rudyard Kipling's The Jungle Book. By car, jeep, or elephant, discover the diversity of India's wildlife. Bring your camera!

Namaste. Welcome to India! You will be met by our representative and transferred to your hotel.

Delhi is a bustling metropolis that incorporates the ancient with the modern. Amidst the skyscrapers, the monuments stand as a silent reminder to India's legacy. Driving from the airport, you will be impressed with Delhi's spacious, tree-lined streets and garden parks. Overnight at the hotel. 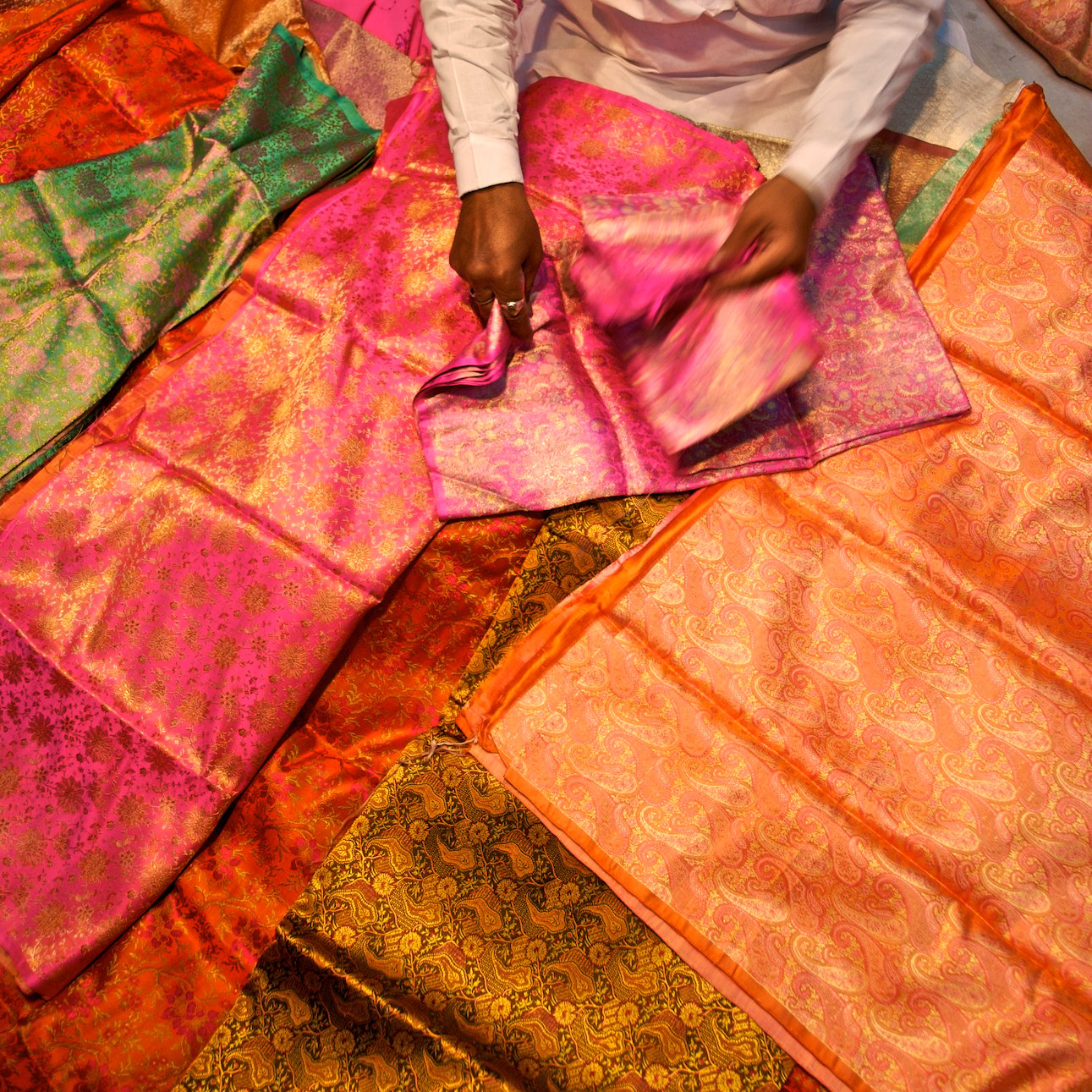 After breakfast, join a friend of Sodha Travel for an exclusive rickshaw experience in Chandni Chowk.  This is not your standard guidebook tour! Witness the architectural marvels, the multicolored facades, beautifully decorated shops, ethnically dressed locals and the fragrances emanating from the potpourri of eateries that line the historical alleys.

Mughal Emperor Shah Jahan (1592-1666) built the walled city of Delhi on the banks of holy River Yamuna.  It had a magnificent palace known as Red Fort, impressive mansions, enchanting bazaars, elegant shrines, royal gardens and fountains at every corner to romance ones' senses.  The Emperor’s beloved daughter Jahanara designed a major street called Chandni Chowk in front of Red Fort, with a canal running down the center and pools at major intersections reflecting the moonlight.  During the British regime, the street underwent major changes and since then this area has witnessed some of the most important events in Indian history. Today these splendid ruins and tales of valor are a testimony of the evolution of the times.  Chandni Chowk truly reflects the national unity, secularism and diversity of India. The tour covers 20 main sites including palaces, mansions, elegant shrines and colorful bazaars.

Continue to Mehrauli and the Qutub Minar complex. Originally an ancient Islamic monument, the Qutub Minar is the tallest tower in India. Built of red sandstone and marble, the minar is not without controversy. Some believe it was built as a tower of victory to signify Muslim rule in the country, while skeptics claim it was erected to call the devoted to prayer. The complex also houses the first mosque to be built in India and an iron pillar that mysteriously has a high resistance to corrosion, even after being exposed to the natural elements for centuries. Also, drive by the India Gate, Parliament, and the President’s residence.

In the morning, board your executive express train to Agra. Upon arrival, meet your guide and visit the Agra Fort, a magnificent citadel with marble palaces, ornate alcoves and terrace pavilions.

Continue to lunch with a local family.

In the evening, enjoy a heritage walk in Old Town. Step off the tourist track and visit the markets and local places of worship. Under the guidance of an expert, explore the busy streets for lost stories and past traditions. Learn about the architecture, history, and the age-old customs of this iconic city. This tour is conducted around the old market area and includes a visit to Agra's landmarks, such as the Jama Masjid, the spice market, and the famous goddess temple before ending the tour with an unusual view of the Taj from the Yamuna.

If time allows, we also recommend a visit to Sheroes café. Away from the marble majesty of the Taj Mahal, the café is run entirely by victims of acid attacks so they can be self-sufficient and raise their families. Evening at leisure and overnight.

In the morning, enjoy a sunrise visit to the Taj Mahal. (Note: Due to weather and heavy fog, a sunset viewing is recommended in December/January.) Built in the 17th century by the Mughal Emperor Shah Jahan for his beloved wife Mumtaz Mahal, the Taj took over 22 years and 22,000 men to build. The monument is truly a wonder of the world. Return to your hotel for breakfast. Continue to the Agra Fort, a magnificent citadel with marble palaces, ornate alcoves, and terrace pavilions.

Later, drive to Ranthambore (5 hours). Ranthambore National Park is one of the most filmed wildlife reserves in the world. It was declared a wildlife sanctuary in 1955 and became a part of Project Tiger in 1973. As the park is relatively small, guests often view leopards, tigers, and jungle cats. Overnight in Ranthambore.

Today, enjoy exclusive morning and afternoon game drives by jeep to explore the varied wildlife. Bring your camera for some spectacular encounters in this preserved land. Overnight in Ranthambore.

In the morning, drive to Jaipur (4.5 hours). Jaipur, the vibrant capital of Rajasthan, owes its name, foundation and planning to the great astronomer and warrior Maharaja Jai Singh II. The city is fondly called the “Pink City” due to the pink colored buildings and avenues.

In the evening, visit Elefantastic. Spend quality time with the elephants at this renowned sanctuary that provides a critical foundation for breaking the cycle of elephant tourism. Guests can spend time feeding, bathing, painting, and walking the rescued and rehabilitated elephants, but rides are not permitted. The founder, Rahul, also supports the welfare and education of the caretakers and their families through the human-elephant interaction program. Overnight in Jaipur. 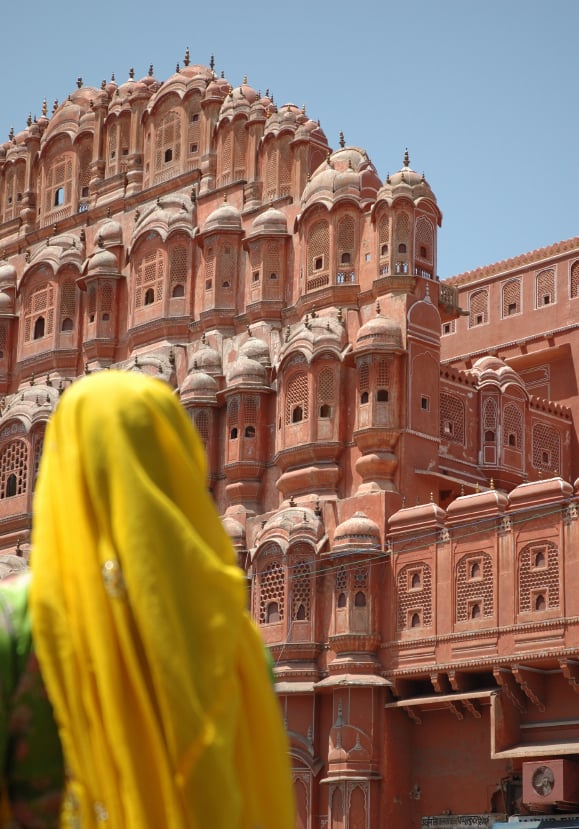 Start your morning with a visit to the Amber Fort. Perched on a hill, the fort is made of sandstone and marble and is one of the most popular attractions in Rajasthan. In the fort, you will see magnificent palaces and halls covered with mirrored mosaics. Note: You may ascend the fort by elephant or jeep.

After lunch, explore Jaipur city. Visit City Palace, a blend of Rajasthani and Mughal architecture that is still occupied by the Royal family. Also view the Palace of the Winds (Hawa Mahal) and Jantar Mantar, the solar observatory built in the 18th century. It includes a set of some 20 main fixed instruments. They are monumental examples in masonry of known instruments but which in many cases have specific characteristics of their own. Designed for the observation of astronomical positions with the naked eye, they embody several architectural and instrumental innovations. This is the most significant, most comprehensive, and the best preserved of India's historic observatories. It is an expression of the astronomical skills and cosmological concepts of the court of a scholarly prince at the end of the Mughal period.

After breakfast, transfer to the airport for your flight to Jabalpur via Delhi. Upon arrival, drive to Bandhavgarh (4.5 hours). Bandhavgarh National Park is one of the few havens in Asia for the Bengal Tiger, considered the pride of the jungle. During the afternoon discover the extensive variety of animals: bear, sloth, tiger, leopard, and sambar. Overnight in Bandhavgarh.

A full day spent either by jeep or elephant to view the wildlife. Overnight in Bandhavgarh.

In the morning, drive to Kanha National Park (4 hours)). The lush sal and bamboo forests, grassy meadows, and ravines of Kanha provided inspiration to Rudyard Kipling when writing The Jungle Book. Kanha National Park is one of Asia's premier wildlife reserves. In 1973, it was included among the first tiger reserves under Project Tiger. Evening at leisure and overnight.

The luxury tents feature spectacular glass doors that lead out to a floating verandah with a stunning view of the Banjaar River and the core zone of Kanha National Park.

Today, transfer to the airport in Jabalpur (4.5 hours) for your flight to Delhi or Mumbai. Upon arrival, connect to your onward flight. Bon Voyage!

-OR-
Design Your Tour